The impressive play of Winnipeg’s defenders was led by Adam Bighill who recovered a fumble for a touchdown in the third quarter, along with DeAundre Alford who found pay dirt on a 22-yard pick six in the second quarter.

Bombers’ quarterback Zach Collaros threw 19 completions for 252 yards, one touchdown and one interception.

Cornelius tossed three interceptions while going 19-for-31 in his CFL debut.

The league’s leading rushing James Wilder Jr. picked up 71 yards on the ground for the Elks while notching two major scores.

Winnipeg appeared to have opened the scoring 3:46 into the first quarter with Darvin Adams hauling in a nine-yard strike from Zach Collaros.

Quite promptly, Elks head coach Jamie Elizondo tossed his challenge flag for offence pass interference on Adams and won. That backed the Bombers up by 10 yards.

Just two plays later, Collaros decided to hunt down Adams in the end zone once again.

This time the two connected for a 12-yards score. Adams’ third touchdown of the year, tying him with Kenny Lawler for the team lead in receiving TD’s. 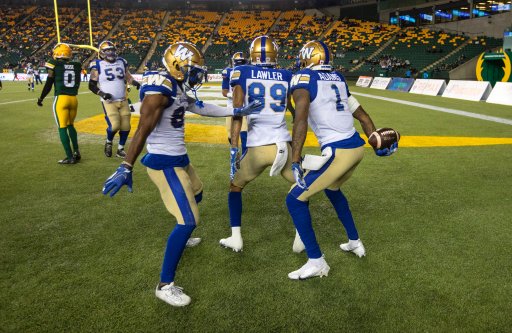 A shanked punt by Hugh O’Neill set the Bombers up with great field position for their second drive and they didn’t wait long to take advantage.

The six-play scoring drive ended in Nic Demski pinballing his way through several Elks defenders en route to the end zone from 21-yards out. 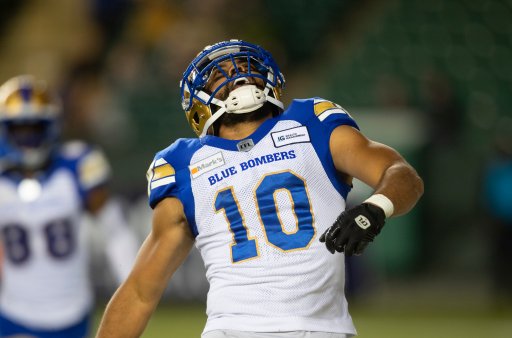 Winnipeg Blue Bombers’ Nic Demski (10) celebrates a touchdown against the Edmonton Elks during first half CFL action in Edmonton, Alta., on Saturday, September 18, 2021.

Collaros was anything but gun shy in the first quarter as the veteran QB tossed up yet another end zone target to Darvin Adams.

His pass was picked off ten yards deep into pay dirt by Trumaine Washington. The massive defensive play for Edmonton closed the quarter with Winnipeg leading 14-0. 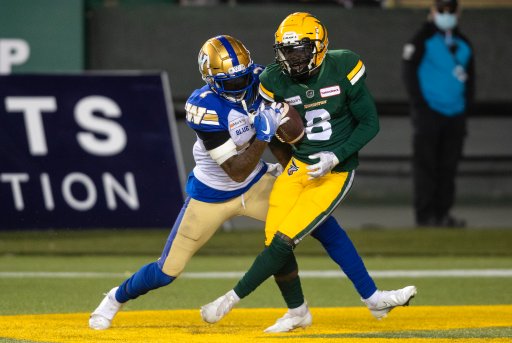 In the midst of another ineffective drive by Cornelius and Elks, receiver Derel Walker fumbled due to an excellent play to jam the ball loose by DeAundre Alford.

But Winnipeg managed to hand the ball right back at their own nine yard-line after a sack fumble by Christian Rector on Collaros.

On the first play of the drive, James Wilder Jr. took a handoff through several would-be tacklers for Edmonton’s first score of the game.

The Bombers marched to the locker room up 15-10 at halftime.

Edmonton came out firing in the second half with a 30-yard grab from the team’s leading receiver Greg Ellingson.

The big play got the Elks into the red zone and Wilder Jr. finished once again with a 19-yard touchdown run. 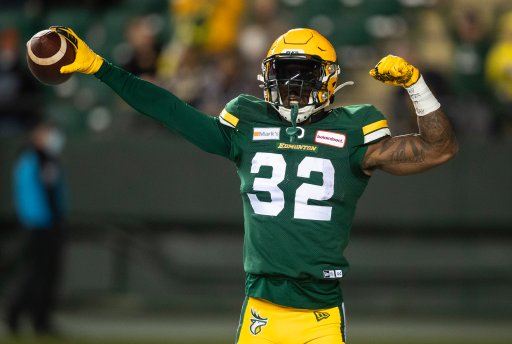 Edmonton’s second touchdown marked Wilder’s second of the night and third of the season.

Bombers’ kicker Ali Mourtada proceeded a 51-yard field goal in his first career CFL game. The miss brought the rookie to 0-for-2 on the night after missing a 28-yarder near the end of the second quarter.

The Bomber defense pulled a game changing play out of their pocket with Alford intercepting Cornelius at the Elks’ 22-yard-line. Alford switched gears and took it to the house for six points.

Collaros completed a pass to Adams on a successful two-point conversion giving the blue and gold a 23-16 lead.

Edmonton picked up another field goal courtesy of a 32-yard Sean Whyte boot.

Mourtada was given an opportunity to match him at the other end but the 31-year-old sent a 44-yard attempt wide for his third missed kick of the night.

It didn’t take the Bomber defense long to provide another big boost.

Jackson Jeffcoat stripped Cornelius at the one yard-line and Adam Bighill scooped up the ball before crossing the goal line. 30-19 Bombers.

Elks’ back-up quarterback Dakota Prukop provided a spark with a 44-yard scamper into the red zone.

Edmonton failed to convert the opportunity into a touchdown but Whyte nailed another field goal, making it a one possession game with under ten minutes left.

The Bombers responded with another scoring drive ending in a Sean McGuire QB sneak, McGuire’s team-leading sixth rushing touchdown of the year.

That capped off the scoring to give the Bombers a 37-22 victory.

Winnipeg improves to 6-1 with the win and remains undefeated against the West Division.

The Bombers have their first bye week of the season coming up before returning to action in Vancouver against the Lions (4-2) on October 1.