While all Canadians have been struggling with their mental health since the onset of the COVID-19 pandemic, new parents find it especially isolating and tiring, according to a Regina doula.

Sara Beckel, doula and coordinator at Regina Perinatal Health Network, says new parents are dealing with added stress like lack of family support due to the pandemic, returning back to work, juggling family demands, and the fear of the unknown.

“Even with the vaccine, there’s still a level of unknown for young children and babies and I think that we’re also in a space where the isolation has become normal and so we’re trying to navigate the space of slowly re-entering the world,” Beckel said.

“That’s hard enough for new parents when they’re on mat leave and at home. But it’s especially stressful when you’re returning to a world that feels different.”

Beckel is trained in post-partum support and provides non-clinical care for families in need.

“It certainly is an issue that we need all eyes on and we do need to invest in because of the health of our communities as well,” Beckel said.

For parents in Regina, Beckel said the Perinatal Health Network is providing direct services for families in need and coordination of care for anyone who is a new parent or soon-to-be parent who is struggling with their mental health.

Beckel said she thinks that many new parents have experienced a loss of community throughout the pandemic.

“Parenting is really a learned skill and we learn it by doing it around other people and so that loss of community — it is quite significant,” Beckel said.

Funke considers herself a very social person so COVID-19 did have an impact on her mental health.

“I like to be busy. I thrive when I’m around people, my friends, my family,” Funke said.

She was in Mexico when the pandemic hit Canada and had to return home to self-isolation.

“Everything just changed and then there was motherhood, then I was pregnant.”

“You hear that you get the pregnancy hormones and you hear to expect not to sleep,” Funke said. “There are two parts to motherhood — it’s either, ‘Oh my God, instant love, instant joy, it’s the best thing ever,’ or you’re never going to sleep again (and) this tiny human is going to terrorize you for the next 10 years of your life, at least.”

When her daughter was born, Funke said she felt a disconnect.

“I didn’t have that instant sense of, ‘Oh my gosh, this is the best thing ever,’” she recalled. Instead, she felt like she had PTSD from just the birth and being in the hospital. That overshadowed her first days of motherhood. “You didn’t get visitors. It was very isolating.”

She said as time went on, around the five-month mark, she was able to bond with her new baby and enjoy the experience.

“You think instantly if you have postpartum depression or anxiety, immediately you’re miserable or you’re suicidal, or whatever it is. But for me it took a few months — things were really good, I was feeling more normal and then all of sudden I was really tired.”

Funke described it as brain fog, saying she had trouble concentrating, and either felt super emotional or not emotional at all.

Funke did an EPDS — a screener for postpartum depression. What she found out was whether she was sleeping or spending time with friends, it wasn’t changing how she was feeling.

That’s when Funke said she needed to seek out more support to help regulate the way she was feeling.

Funke works as a KidsFirst Home visitor, which is a parenting support program, so she knew about some of the support she’d be able to access for herself.

Funke got in touch with Beckel at the Regina Perinatal Health Network. After a Zoom call with Beckel, Funke was given a couple of options moving forward.

Now, Funke does a group call with other moms every Wednesday.

“I was trying all the things that you hear,” Funke said. She joined mom and baby groups, tried working out, ate healthier meals, and spent time with friends. “In my mind I was like, ‘Oh well, I’m checking all the boxes I should be feeling better.’ And I wasn’t.”

That’s when Funke decided that taking medication and seeking professional help were “what it was going to take for me to feel like myself again.” 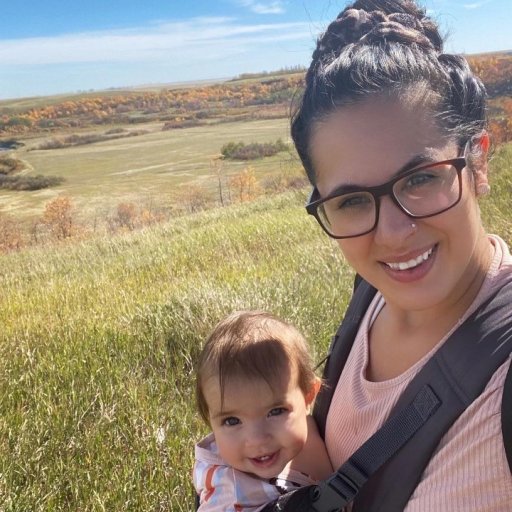 Funke said she’s both nervous and excited to return to work.

On one hand, Funke said it’s been isolating being on mat leave while the pandemic is still going on, while on the other hand, she’s also worried about her daughter being OK with someone else taking care of her.

Funke said she’s also worried about the constant exhaustion she deals with. “Am I going to get to a place where my medication gives me the energy I need to get through the day and be functional?”

Beckel said the new parents she works with who are returning back to work are experiencing a lot of stress and fear of the unknown when it comes to meeting coworkers, COVID-19 protocols and policies.

“I’m just really encouraging them to communicate with their workplace, reach out sooner and get that information, gather as much information as you can so they can begin making a plan,” Beckel added.

“Finding a daycare that feels right for the parent in order to balance the needs of employment and parenthood at the same time is still quite challenging,” Beckel said.

For parents who might be concerned about their children getting sick at daycare, Beckel encourages them to talk to the care provider so they feel safe.

“Everybody has different needs for their family and so open communication lines during this challenging time is very, very important,” Beckel added.

Beckel said it would help new parents returning to work if their employers could reach out to ease the transition and make sure everything is well organized upon the employees’ return so they don’t have to search anything out.

She added it’s also important for employers to understand it’s a big adjustment for a new parent to return to work.

“Having as much compassion for that employee and flexibility as they find their way is really important. We need to take care of people during these times and we need to be understanding and open minded about everyone’s needs,” Beckel said.

Funke added that while the issue of the cost of mental health is coming to the forefront, it still needs to be a bigger priority.

She said she found some support groups, like art classes or yoga she was interested in but was put off by the cost — some at a price of $200.

Funke believes it’s hard for anyone, especially moms, to find accessible mental health while they are isolated at home with a baby. She said she also thinks there’s guilt associated with it, and moms may not want to tell people they are struggling.

Funke said new moms may not want to be honest about their mental health struggles, worried others may have concerns about the baby’s safety and wellbeing and wonder if the mother loves her child.

“That’s definitely not it. I love my child a ton. She’s developing wonderfully,” Funke said. “I’ve tried to give her as many experiences as I can, but I’m still allowed to have those mental health struggles that I’m working through the way that’s best for me.”