A Rothesay council candidate says a series of harassing phone calls have led her to lobby for Elections Act changes — days away from New Brunswick’s municipal elections.

Tiffany Mackay French says the publication of her personal information made her vulnerable to a man who took an interest in her based on her campaign posters.

She says after trying several times to reach her through town hall, he was able to get her cellphone number from the returning office — calling her numerous times.

“The nature of the calls was very strange,” says Mackay French, “they were harassing.”

“It was enough for me to be alarmed and to feel fearful and I didn’t want to hear from him again. 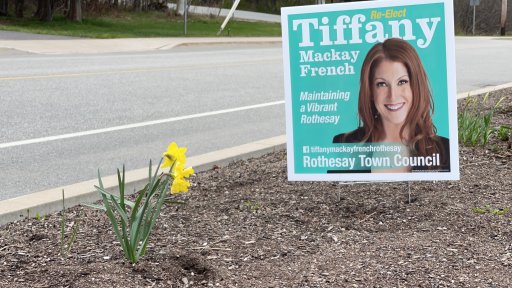 She declined to provide more details but says after three calls, she blocked his number and contacted police.

“The caller was spoken to by police, and the matter has been concluded,” Becker writes.

Mackay French says the most unsettling aspect of the incident was that the caller isn’t even a constituent.

That information is made publicly available at returning offices or the Elections NB website.

She says conversations with other gender-diverse candidates reveal the experience to be nearly universal.

“I heard from a woman today who said this was the reason why she wasn’t running,” says Mackay French.

She’s since been able to have her address replaced with the returning office — which she says still allows anyone who wants to send a letter or schedule a meeting to do so.

Partnering with women-in-politics advocacy group See Jane Run, Mackay French is requesting changes to the elections act that would remove the need to make a candidate’s home address public — while still confirming privately to Elections NB they live within the constituency.

“If we can’t have a safe space, women can’t be brave,” says Kathi Zwicker, co-lead of Women in Politics Fredericton.

“Your name and your picture are all over the place and who knows who might pick that up and decide to come visit you at 11:00 at night.”

Zwicker and Mackay French agree those numbers would be even higher if further protections were in place.