A Winnipeg family has been reunited with a furry friend — almost two years to the day after she went missing.

Dana Curtaz told Global News her cat Maggie, only a year old at the time, disappeared in October of 2019 after the death of her best friend, a black lab named Annie, who had cancer.

“Maggie and Annie were best buddies, so when Annie was put down, Maggie was out of sorts,” said Curtaz.

“There was one day, a few days after Annie passed away, that we opened the back door and (Maggie) took off, and she just never came back. We thought, ‘maybe she’s looking for Annie.’

“My husband went looking for her in the neighbourhood, asking people if they’d seen her, I made flyers, we put them in people’s mailboxes, posted pictures all over the place and we just never knew what happened to her.”

Curtaz said after a while, they gave up hope that Maggie — who had been an indoor cat her entire life and didn’t have experience on the street — would ever be seen again.

To fill the void left by Annie’s death and Maggie’s disappearance, Curtaz said another cat, another dog, and, just recently, a new puppy had joined the family — and then she heard the news Sunday night. 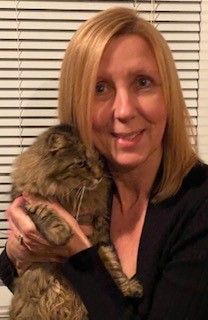 Dana Curtaz and Maggie after their reunion.

“On Sunday, after the family left, just after Thanksgiving dinner, I get a message from Missing Cat Alert saying, ‘your cat’s been found, and this lady has your cat who has been missing for two years,’” she said.

“I called her, and she said she had been feeding Maggie since July, and she finally — after three months — gained enough of her trust that she was able to look in her ear at the tattoo.”

The number on Maggie’s tattoo led back to Curtaz and to their unexpected reunion, although it took the cat a little while to get back to her old habits.

“She’s a very skittish cat, so I think she wasn’t sure at first,” she said.

“We set her up in our spare bedroom at first … and my husband and I took turns going into the bedroom spending time with her to try to get her used to us. She actually slept with me last night in my bedroom, and I think she now knows who we are.

“I’m going to take her to the vet on Friday, get her checked over, she’s going to need to be dewormed and she’s definitely going to need her claws trimmed, because they’re dangerously sharp — especially if we’re going to try to integrate her with the other pets in the house.”

Somehow, during her two years in the wild, Maggie found her way all the way across the city — in St. James, after starting out in Transcona — a journey Curtaz, or anyone, will never know the full details of.

For now, though, she’s just happy Maggie’s back where she belongs.

“It haunted me for the longest time,” she said.

“I felt guilty that I had let her get out, and I always wondered whatever became of her. She’d been gone longer than she was alive — she was one year old when she disappeared, and now she’s three.”

Curtaz said Maggie is “really calm” now that she’s home, and she’s already made friends with one of her new housemates — a golden retriever — and is working on getting introduced to the other four-legged residents.